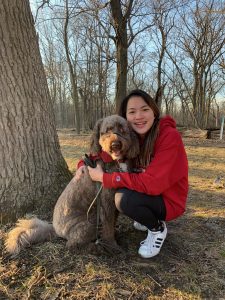 Phoebe Spratt is a IU Sophmore and computer science major. She is a radio host for the organization WIUX which is a student run program funded by the university. Phoebe’s radio show, “Mood Swings“, includes custom made Indie/Alternative playlists and commentary.

What project are you currently working on and how did your personal interests help you find this?

I am hosting a radio show for WIUX. WIUX is student media so I also help with the marketing and content teams.

What are some of your memorable moments with the show?

My friend from the media school told me that I could host a radio show and play the music I wanted to which I thought was cool.

What has been the most useful resource you have used at the university?

IU has a studio where I host the show. They have all the equipment there. So there is internet radio and FM radio studio rooms that the university provides in the media school.(Franklin hall)

What has been the most useful resource or experience outside the University?

What was your favorite learning experience?

Sometimes I will stumble over my words when I am talking to other people in person. So running the show has made me be more confident in what I was saying.

What is the best advice you’ve received?

The first week of programming for this semester was last week and I have a B-side show which is hosted online. The recording process is a little bit different so I am used to hearing my voice on the radio. I wasn’t really sure if people could hear me. The start of the show didn’t go as well as I wanted it to.

My dad texted me, “tech glitches happen and DJ’s know how to laugh it off and move on. Stop worrying about the beginning of the show, now go about the show as you had originally planned” Basically, get over it.

Is there anything else you would like us to know about you?

You can listen to the radio show at https://wiux.org/listen/bside/ my show is under the Tuesday section and look for Phoebe Spratt.

How does hosting a radio show through IU make you feel?

Good I guess. It gives me something I have to contribute to IU. I don’t really know how many people are listening to me, but I get 1 hour and it gets me away from CS and all my classes. I am sitting in a room playing music and talking. It’s something to look forward to every week. Plus I get to get out of the house which is nice with most everything being online.

What’s your favorite album to listen to?

That’s a hard one. I don’t know if I have a favorite, but the first one I can think of is a concept album by the Antlers called Hospice. It tells a story of someone going through hospice which I think can be applied to a relationship, but not a great relationship.

What does music mean to you?

Music means a lot to me. It’s hard to choose one definition, but with the radio show in mind. I’ll play songs that have a lot of meaning to me. I like sharing music and I have a lot of songs that explain things I’m thinking that I don’t really know how to put into words. Music like that can be an ice breaker and the type of music you listen to tells a lot about you. It’s a universal thing that people enjoy, everyone has an artist that is their favorite.

Could you please tell us about how you prepare your radio shows?

When preparing for the shows I am choosing the songs. This semester is a little different. I am making my shows have a theme since it’ll be more fun to make the playlists. I have notes of ideas for the show and the songs that I would play with them.

Are you open to connecting with other students if they are interested?

If you are interested in reaching out to Phoebe, feel free to email her anything relating to music at phospra@iu.edu!